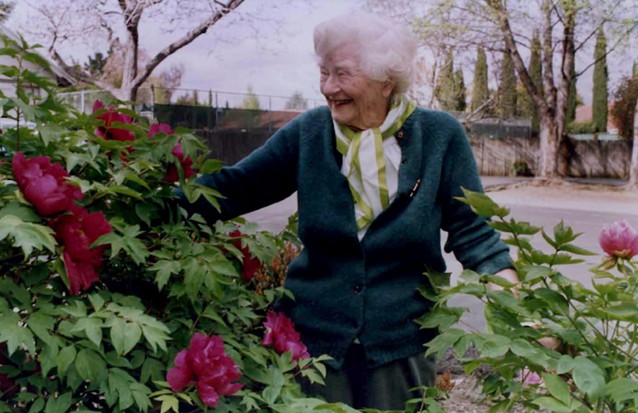 Peonies with a Past

The Chinese call peonies Sho-ya — “the beautiful.” But for California gardeners, “beautiful headache” might be more accurate.

Peonies are large-flowering herbaceous perennials that grow almost without effort in some parts of the country. But in the South Bay Area, they are chancy, at best.

Their failures are legion. Bush peonies put out new green growth each year, but they may not produce flowers. The tuberous roots won’t bloom if planted too deep, or dry out and die if planted too shallow.

Even Sunset Western Garden Book warns that while bush peonies may grow in Zones 14-16 (that’s us), they only bloom well with pronounced winter chill. Hot, dry weather is not to their liking, Sunset says.

All of which is slightly amusing to Dorothy Farrington, 86, who has watched beautiful, deep pink fragrant peonies bloom year after year at the Farrington garden in San Jose. The Victorian house, built by the Kirk Family in 1887, has been a family treasure for three generations. In 1979, she donated [use of the] Farrington House to the Junior League of San Jose.

The peonies are especially dear to Dorothy Farrington. She recounts that ancestors of those peonies came overland by wagon in the mid 1800s with the Clayton family, who later worked in real estate and insurance in San Jose.

Ethel Kirk Farrington (Dorothy Farrington’s mother-in-law) admired Mrs. Clayton’s peonies. She obtained a shoot of deep purple and planted it by the front entry. “Victorian ladies prided themselves on their gardens,” she says.

Then, in the early 1930s, Ethel Farrington read in Sunset magazine how peonies could be hybridized, and started working with that lone peony. With a tiny brush and cheesecloth, she cross-pollinated the flowers and waited for seeds to develop, which she used to start new plants. It took seven years to achieve her first blooms.

When Dorothy and Theo moved into the home in 1951, they inherited and nurtured the peonies. Farrington gardener Rudy Hernandez, who has cared for the peonies for many years, prunes the bushes in November and fertilizes twice a year.

Every year without fail the 1 Â½-acre garden begins to bloom in March, with peonies in shades of purple, deep pink, pale pink, and white. The hard freeze last December gave the peonies extra fine blooms this year.

Some may wonder about peonies thriving for more than 50 years. But Lucy Tolmach at Filoli Center isn’t surprised.

“We have a 25-foot-square bed of peonies that was planted probably in the 1920s. We don’t know the name, but they are double pink and bloom in the middle of May,” says Tolmach who is Filoli’s garden supervisor.

“We never divide them, never disturb them. We water once a week and we fertilize them in the fall and again in the spring during the growing season,” Tolmach says.

What assures the blooms of these old-timers at Filoli and Farrington garden is the weather. More specifically, it is “the chill factor which gives the herbaceous roots sufficient winter rest,” says Fred Boutin, former botanist at Huntington Botanical Gardens in Southern California, who now lives in Tuolumme.

Tolmach says the temperatures at Filoli often dip to 18 degrees. “It’s what these plants need to bloom,” she says.

But 18 degrees in the Farrington garden in Willow Glen? “You get pockets of colder temperatures all over the valley,” Carmen says. “If the chill time is right, peonies will make it.”

And that’s a good reason to give peonies a try. The tuberous roots begin appearing in nurseries in November and can be planted through early spring. Peonies are also available through numerous mail-order bulb catalogs, such as Wayside Gardens or Marde Ross and Co. Prices for a single peony tuber run from $13 to $50; most are in the $20 range.