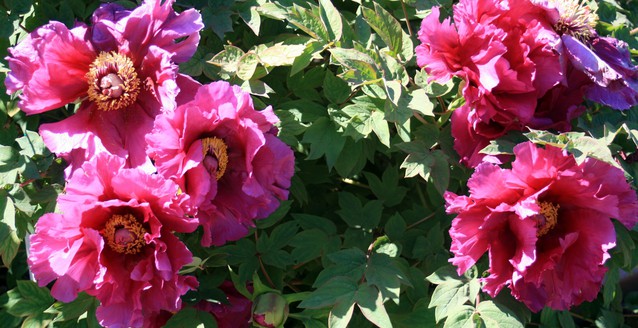 Once standing at the center of a thousand acre ranch, today the Kirk-Farrington home is surrounded by approximately two acres of manicured garden. The three generations of family that lived in the house continued to ranch the property up until the late 1960s. Eventually, the majority of the land was sold off and now comprises the residential neighborhoods that surround the home. The Kirk-Farrington garden still contains some surviving heritage trees from earlier days, as well as newer additions that bring the yard to life year round with color, texture, and fragrance.

When you view the house from the street, the first thing you see are two magnificent magnolia trees (Magnolia grandiflora) shading the spacious front lawn. These trees are over one hundred years old and may be the largest specimens of their kind in California. On the east side of the house grows a large Pacific Coast redwood tree (Sequoia sempervirens) that is 25 feet in circumference and over 100 feet tall. This tree -- the “Theo Redwood” -- was planted July 27, 1905 to commemorate the birth of Ethel and Sidney Farrington’s only child, Theo Kirk Farrington.

Other vintage trees on the property include an persimmon tree which still produces an abundant crop in each fall, a gnarly old Hawthorne tree with a brick from bygone days embedded in the crook of its truck, a giant avocado tree planted years ago from a sprouted avocado pit, and a single English walnut tree left over from the ranch’s orchard days. Another interesting specimen is a parti-colored camellia, which probably began its life as a bush, but is now nearly as tall as the house.

Without a doubt, the highlight of the garden is the spectacular collection of rare Chinese tree peonies, over 160 plants in all. The original peony slips were brought to San Jose from the Midwest in the early 1930’s by Mrs. James Clayton, who later became friends with Ethel Farrington. Ethel admired her friend’s peony garden and obtained a few roots, which she planted in her front yard. Ethel later learned about cultivating and hybridizing peonies from an article in Sunset Magazine, and began cross-pollinating her plants to achieve more colors and blossom patterns. Many of Ethel’s plants survive to this day in the Farrington peony bed.

Modern peonies have been added to the garden over the years. Herbaceous and Itoh peonies are more recent additions. These newer varieties are more robust than the older peonies. They tend to stay greener throughout the summer, unlike the antique varieties whose leaves darken and crinkle in the summer heat.

When the garden is in bloom in late March, it is a riot of pink, white, yellow, coral, lavender, fuchsia, red, mauve, and peach. Blooms range from simple, single-flowered varieties, to extravagant double-doubles. Some flowers are larger than dinner plates.

The Kirk-Farrington grounds were completely re-landscaped in 2000 with many of the original trees and all of peonies retained. A formal rose garden surrounded by low boxwood hedges was added at the rear of the house. In the center sits a gazing ball surrounded by colorful annuals. The rose garden is flanked by a charming gazebo encircled with Japanese wisteria vines in the springtime. The peony bed and front garden also contain sizeable rose beds. There are over fifty varieties of roses on the property. Some are old roses from the days of Dorothy Farrington and others are more modern introductions.

Along the Garden Paths

Beds of ivy, star jasmine, and creeping bluebells (Campanula muralis) surround shady lawns in both the front and the back of the property. Studded throughout the groundcover are large hydrangeas that bloom in shades of pink, blue, and rose in the summer. Garden paths are lined with catmint (Nepeta faassenii) and English lavender whose blue flowers are a magnet for local honey bees. The color and fragrance of these flowering plants enliven the garden all summer long.

Citrus trees do well in San Jose’s temperate climate. The property contains large navel orange tree, a murcot tangerine, a blood orange tree, a Mexican lime, and a lemon tree. The enormous kumquat tree near the rose garden has been called “a botanical confection” and is covered for half of each year with shimmering orange fruit. Other smaller trees on the property include a star magnolia, a saucer magnolia, a dozen deep rose crepe myrtles, and Chinese pistache and ash trees that provide summer shade and autumn color. The property is bordered by tall hedges of English laurel along the sides and back, and a white picket fence across the front.

Near the back door of the house hangs a large cast iron bell that was brought across the plains by Dorothy Farrington’s grandmother, Mrs. Martha Beach. The bell was once used to sound the alarm of an impending Indian attack for the covered wagons, and later at the Bogen ranch to summon the men from the fields.

At the far back of the property sits a large barn. The center of the barn has a door on either end so carriages could drive through. Originally built to house farm implements and feed for ranch animals, in the 20th century the barn served as a garage for Theo and Dorothy Farrington’s automobiles, and for Mrs. Farrington’s beloved black London taxi cab.